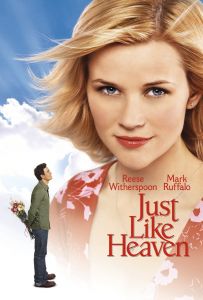 Just Like Heaven is a romantic comedy film released on September 16, 2005, in the U.S. and Canada. Set in San Francisco, it was directed by Mark Waters and stars Reese Witherspoon, Mark Ruffalo, and Jon Heder. It reached #1 in the United States box office, though it earned much less than anticipated. It is based on the novel If Only It Were True (Et si c'était vrai...) by Marc Levy. I See You, a Bollywood film, has a similar storyline.
宛如天堂是2005年9月16号由美加共同拍摄的浪漫爱情喜剧。取景于旧金山，并由Mark Waters等人导演。 尽管投入远大于支出，它却是荣登美国票房榜首。 改编自法国作家马克·李维所著的畅销小说《If Only It Were True》。宝莱坞出品的电影 I see you 出自同一主题。

Just Like Heaven is the latest-released live-action film from DreamWorks to be sold to Soros Strategic Partners and Dune Entertainment II. This transaction was made soon after Paramount Pictures became the parent of DreamWorks, which has since become independent again (though Paramount still owns distribution and other ancillary rights to the Soros/Dune-controlled library).
Elizabeth Masterson (Reese Witherspoon), a young doctor whose work is her whole life, had a serious car accident while on her way to a blind date. Three months later, David Abbott (Mark Ruffalo), a landscape architect recovering from the death of his wife, moves into the apartment that had been Elizabeth's.

Elizabeth appears to David at the apartment. Though seemingly a normal person, she has ghostly properties and abilities: she can suddenly appear and disappear, move through walls, and once takes over his actions. When they meet, they are both surprised, as Elizabeth is not aware yet of her condition.

For the most part, David is the only one who can see Elizabeth, leading others to believe that he is hallucinating and talking to himself. It is later revealed that one of Elizabeth's young nieces can also sense her presence although she cannot see her.

At first, Elizabeth does not remember anything of her life, and refuses to believe that she is dead. Her memories come back gradually. Together, assisted by Zen-like psychic Darryl (Jon Heder), she and David find out who she is, what happened to her, and why they are connected. 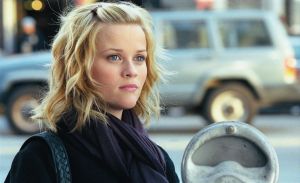 Eventually, David discovers that the reason he is the only one who can see Elizabeth is that he was her blind date. They find that her body is in a coma in the hospital. In accordance with her living will, she will soon be taken off life support. Elizabeth's spirit and David, who have fallen in love, manage to prevent this just in time, and she miraculously recovers. However, she doesn't remember anything that happened during the coma or any of the events with David, which leaves him heartbroken.

One day, Elizabeth goes up to her roof and sees David, who got in with the spare key and is finishing up the garden there. Just as he is about to leave, she asks for her key back. When their hands touch, her memory is restored, and they kiss. Before the credits roll, Darryl is shown looking at them in a crystal ball. Darryl is proud and sighs "Righteous".


Click here to visit: Some useful and practical books that will help you to improve your English writing skills.